James was first ask to speak about his adventures on his return from rowing across the Atlantic Ocean in 2010, at the time he did not know that ten years later he would end up becoming a top international speaker, enthralling audiences with his stories and lessons learned with thousands of people around the world at any one time.

James is often asked to share his values and beliefs with many of the words leading organisations, including eBay, PWC, GSK and leadership establishments such as Sand Hurst Royal Military Academy. 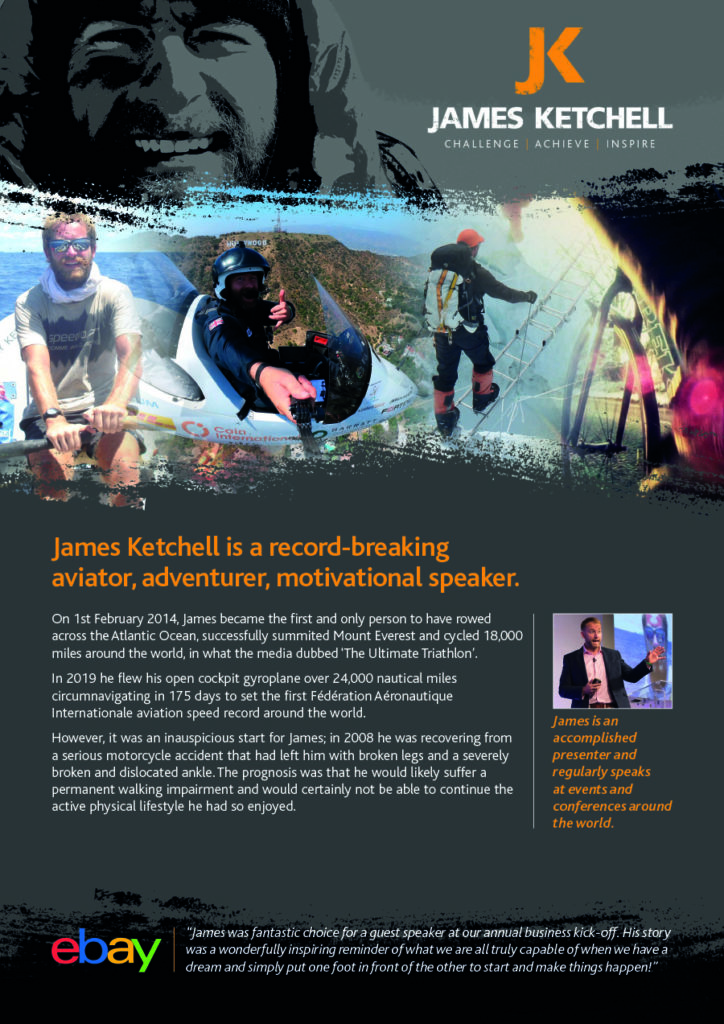 James talks with candour and enthusiasm about his approach to taking on challenges and “without doing anything special” the way he has tackled physical adventures that most of us have only imagined experiencing.

He describes how he set incremental and achievable goals, how he secured sponsorship and support, how he physically prepared himself, and what experiences these challenges threw at him. As James tells his story, the listener will believe that they too could achieve the extraordinary.

Book James for Your Event

Why do it? What motivates James? What could motivate you to set your own challenging goals and achieve them.

How to develop a strong consistent mindset? Turn your brain into your greatest ally, as opposed to your worst enemy.

The importance of a network; the value of persistence. How to set intermediate goals and push the boundaries.

How hard is it to row across the Atlantic ocean, summit Mt Everest & cycle around the world? How is it done? How to step outside your comfort zone.

How to overcome adversity and build resilience, turning negatives into positive opportunities and driving for results.

What it feels like to achieve your goals and how to create a performance culture. Supported by stunning pictures & video captured throughout James’ career.

It’s an immensely fascinating world out there and there is nothing better than personal experience. How to make friends & build a support network?

What others can learn from this and how James looks to support others through his endeavours.

How does James mitigate the risks associated with his expeditions, and how that relates to the corporate world.

James is an accomplished presenter and regularly speaks at events and conferences around the world including, US, India, Europe and the Middle East.

James’ book ‘The Ultimate Triathlon’ was launched in April 2016 and has been endorsed by Bear Grylls.

James’ second book, ‘Chasing Extremes’ is due for release in November 2020.

James’ key message is that we can all set ourselves inspirational goals and achieve them:
the capability to succeed lies within.

His practical and pragmatic learning includes:

Click Here
We use cookies on our website to give you the most relevant experience by remembering your preferences and repeat visits. By clicking “Accept All”, you consent to the use of ALL the cookies. However, you may visit "Cookie Settings" to provide a controlled consent.
Cookie SettingsAccept All
Manage consent